Athletics Victoria along with Melbourne University Athletics Club extend our most sincere sympathy to the family of our longstanding Patron. 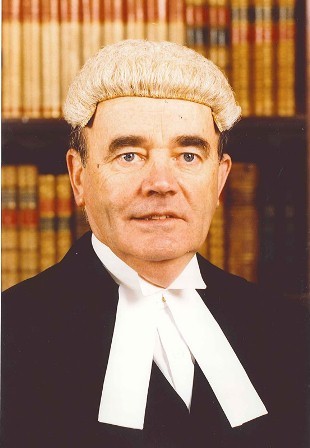 In 1955, he entered Ormond College, and the University of Melbourne, and graduated in law at the end of 1958. He was awarded a Full Blue for Athletics in 1957 and 1958. In 1959 he placed 5th in the Victorian Championships at the 220 yards, and was part of the MUAC team that was runner up in A Grade. The following year, he won a Victorian Championship in the 4 x 110 yards relay with Kevan Gosper, W Earle and E Sandstrom, and placed fourth in 220 yards final.

After serving his articles and working for a year as a solicitor he signed the Bar Roll on 27 April, 1960, reading in the Chambers of former Collegian, W C Crockett. He was appointed a Queen’s Counsel in 1977 and on 29 May, 1988, appointed to the Supreme Court of Victoria. While a barrister he was involved in a number of activities. He was President (1976-1978) of the Victorian Amateur Athletics Association (which would become Athletics Victoria), one of eight MUAC members to have filled the role, and President of Athletics Australia (1978-1983). He served as Melbourne University Athletics Club’s Patron for more than 30 years.  On 29 June, 1962, he married Margaret nee Turner.

Funeral notice: Relatives and friends are respectfully invited to attend the Funeral Service to Celebrate the Life of The Hon. Allan William McDonald AO QC to be held at the Wesley Uniting Church, 100 Yarra St, Geelong on TUESDAY (27th June 2017) at 2:00 pm followed by a private cremation.